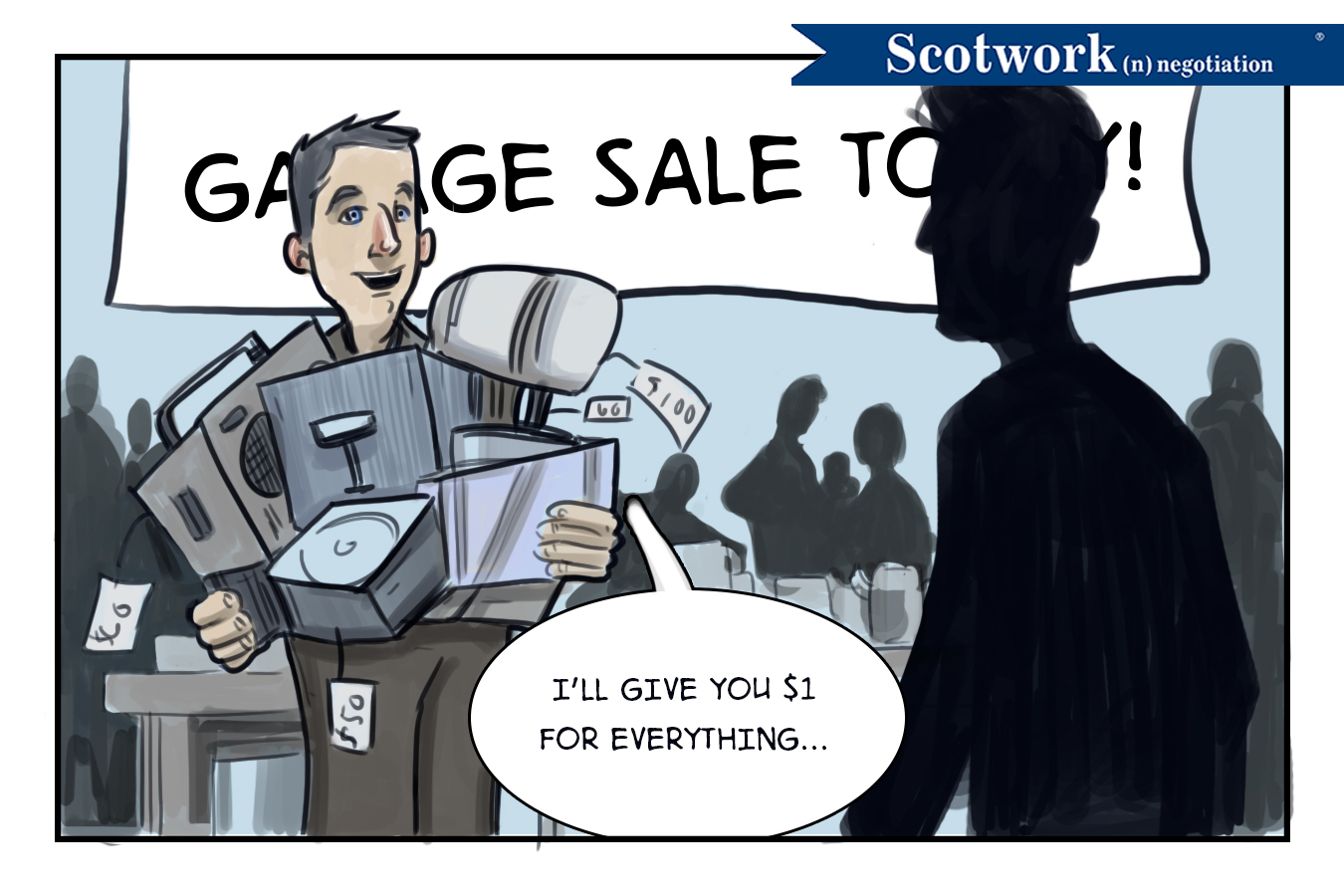 I hate garage sales. The idea of lugging all your stuff out in front of your house so that complete strangers can attempt to steal it for cents on the dollar is painful. Nevertheless, this past weekend we had a garage sale. It was supposed to start at 7 a.m., but as we were pulling things out during the pre-dawn hours, people were already showing up to unapologetically scavenge. Then it began: They would ask, “How much?” I’d give them a price, and then they would ask, “Would you take [insert ridiculous price here]?” and expect to haggle until we met somewhere in the middle. As a professional negotiator, I loathe haggling, and the pain of it started to set in. That is, until I tapped into overlooked sources of power and leverage that ended these attempted haggles early.

First off, why do I loathe haggling? It’s like two dogs competing for a bone — in order for one to win, the other must lose. By definition, haggling occurs when two parties bargain over a single variable, typically price. As one gives, the other takes. No value is created. Well-worn phrases like, “Let’s meet in the middle” are bandied about. For a negotiator, giving up value and getting nothing in return simply hurts (and if it doesn’t, you’re not doing it right!).

That’s what happens at most garage sales — people haggle over price. It’s an accepted, and expected, part of the culture. But it also extends beyond garage sales. There are many buying/selling cultures in which it’s absolutely part of the process. So, if there’s no value exchanged during haggling, most of the power that exists is based on our ability to persuade the other party to give upvalue. At this garage sale, my challenge was that there was only so much persuading I could do. In fact, I was fairly certain that I was doomed to a day of haggling until I had an interaction with one of my first customers.

One of the early birds started pulling things out of boxes and laying them out like he was running a crime scene investigation. Once he created his lineup, he started walking me down the line, asking about the price of each item. He then went back to the top of the line and started haggling with me over the price of each item. Just as he began, someone else walked up and looked at something at the end of his line. “That’s mine,” he blurted, and the other shopper backed off. To which I responded, “It’s not his until he buys it.” That’s when it hit me. Right there, in front of me, I saw how I was going to turn the entire process around and pivot from mind-numbing haggling to value-creating negotiating.

The key to moving from haggling to negotiating is having other variables in play. There has to be something else to trade with. If at the garage sale I let every interaction be about just that one item in hand, there would be no variables other than price — so I had to create them. I found them in three areas:

At the end of the day, we sold everything but a couple of small boxes of trinkets. We also tripled the monetary goal we set for the sale, and I wound up having a lot more fun throughout the day as I engaged in haggle-averting micro-negotiations.

It was also a good reminder that if you get stuck on just one variable, don’t get sucked into value-depleting haggling. Get creative and start looking for other variables to save your value — and avoid the pain!

If you’re not paying attention, you’ll haggle all your value away. Let us help you avoid that. Bring us in to assist you in finding your value in your next negotiation. We can be your advisor, your coach, and your trainer. Whether we create your strategy, assist you with preparation, or develop your team’s negotiating skills, we can help you win at the negotiating table.

We’ve been consulting and teaching our proven negotiation methodology for over 40 years. We know the process, we can identify the skills required, and we have the techniques to negotiate better deals for you. Call us and let’s discuss what we might be able to do for you.

Brian Buck
More by Brian Buck:
Underestimate me again - I dare you
Pardon your turkey
Back to Insights