Be a G.O.A.T. negotiator 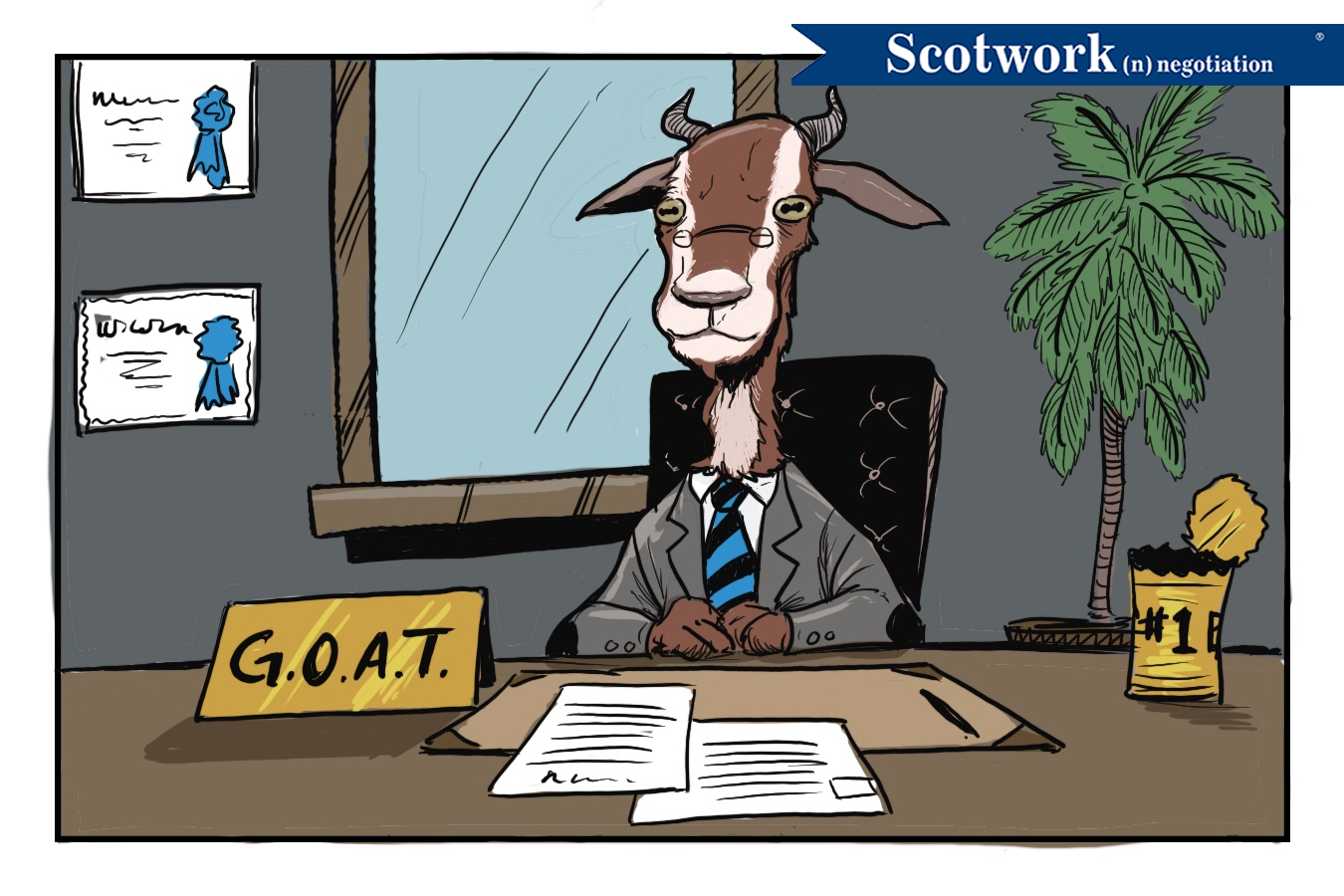 When it comes to sports, the term G.O.A.T. (aka greatest of all time) gets tossed around a lot. Sometimes the title is easy to bestow, due to an athlete’s undeniably impressive career stats. But most of the time, it becomes the subject of endless debates regarding one player who may, or may not, be better than another. However, regardless of who’s your G.O.A.T. — Muhammad Ali, Tom Brady, Serena Williams, Sebastian Vettel, Wayne Gretzky (the actual Great One) — we should be able to agree that they all have two things in common. As it turns out, these two things can turn any dealmaker into a G.O.A.T. negotiator.

All of them worked to be great. Even those with God-given talent had to work to refine that talent. Put another way, they never rested on their laurels. As someone once told me, “Hard work beats hardly working talent every day.” My suspicion is that the G.O.A.T.s believe that too. For instance, Serena Williams spends five hours a day honing her craft. Even during the off season, Tom Brady’s putting in work — both physical and mental — five days a week. That said, it’s no accident that these people are at the top of their game and are universally considered the greatest of all time. They work at it.

By contrast, many “corporate athletes” rarely practice their craft. They just jump in and do it, most of them expecting different results from the same actions. Why don’t they practice their craft? They point to a lack of time, but the reality is that it’s simply not a priority, therefore they don’t make the time. Which is a shame, because it’s practice that gives us the ability to try new things, make mistakes in a safe environment, and learn to get better.

Becoming a great dealmaker requires practice. Just wanting to be great won’t get you there. Reading about being great won’t make it happen. You have to take the time to practice, particularly at those critical deals that have a lot riding on them. No professional athlete shows up to a game without practicing, so why would you show up to a negotiation without doing the same?

G.O.A.T.s have people in their circle who watch them in action, analyze what they’re doing, highlight their blind spots, and hold them accountable for improving. As natural an athlete as Ali was, his work with Angelo Dundee actually set him apart. (For your information, Dundee also trained 15 other world champions.) When Gretzky was asked about his uncanny hockey awareness, he proudly said, “It’s not God-given, it’s Wally-given,” referring to his father, who coached Gretzky on how to anticipate and play differently from everyone else. Sebastian Vettel has been using individual coaches for mental performance as well as focusing on areas of preparedness and time management.

Coaches have the ability to inspire and teach greatness, but their true genius lies in observing, highlighting, and challenging. Coaches can watch and see the entire playing field, whereas a player may see only the play in front of them. Coaches can point out the blind spots that need to be worked on, not to mention the opportunities that must be taken advantage of. Coaches can challenge the athlete to think and perform beyond their own limitations.

When it comes to performance, corporate athletes need many different types of coaches. Much as sports athletes have a nutritionist, an athletic trainer, a sports psychologist, a business advisor, and, of course, the team’s coaches, corporate athletes should have a cadre of coaches to call upon in order to help them achieve greatness.

The same goes for great dealmakers. Dealmakers need deal coaches — someone who can cut through their emotional limitations, bring a broader perspective, and challenge their institutional thinking in order to maximize performance with the goal of achieving the best deal possible.

Being a great negotiator should be any executive’s top priority. We can help you become one! We’ll assist you with resolving conflicts better and more quickly, creating value for all involved, and preserving and even strengthening relationships. Let us partner you with one of our coaches, helping you to become great and get better deals.

Brian Buck
More by Brian Buck:
When a bad deal is good
To open or not to open?
Back to Insights