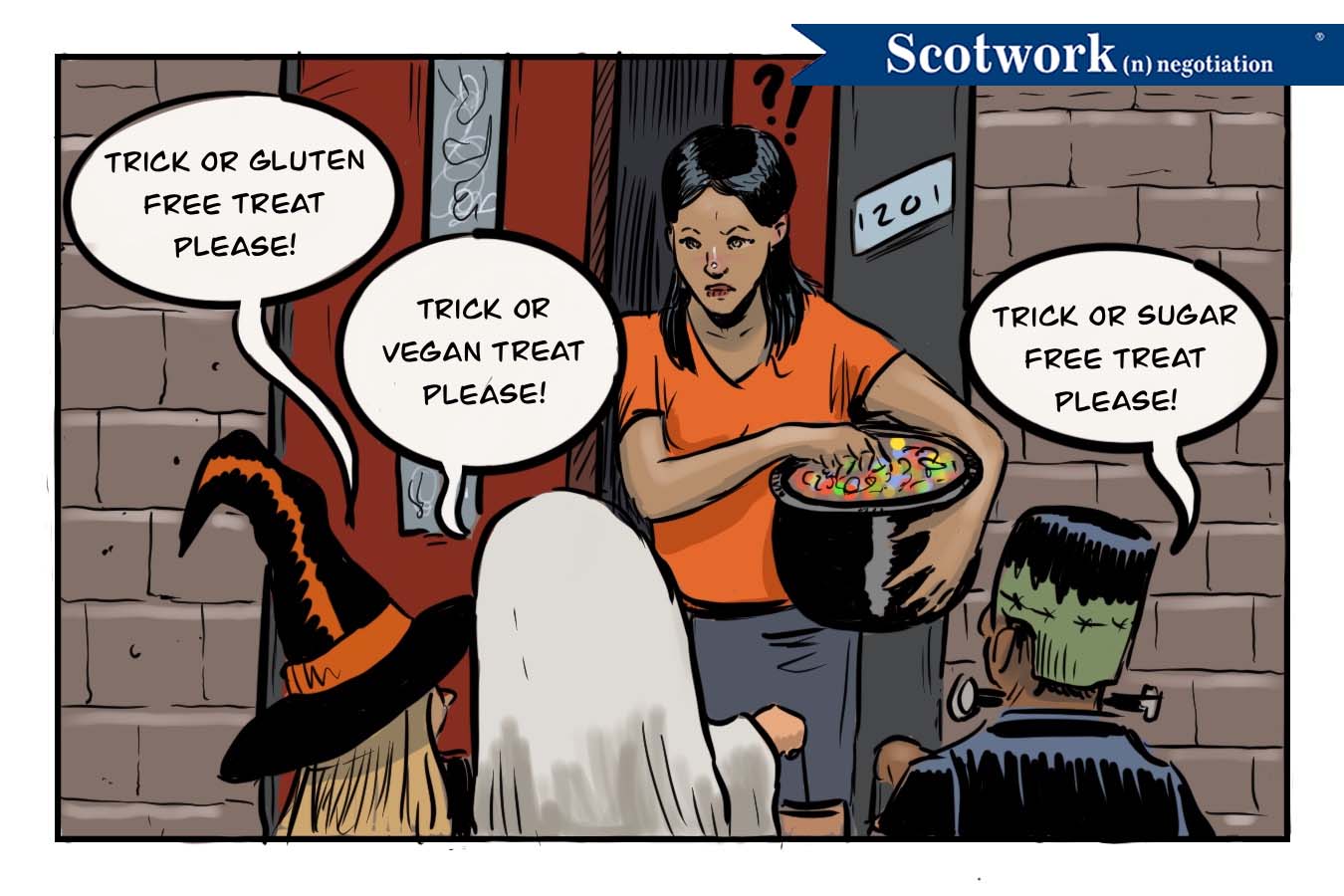 We’re a Halloween family. Love it! We decorate, we dress up, we get the biggest candy bars to hand out — the whole bit. Halloween is the Buck family’s jam. And every Halloween, kids (and some adults) flock to our front door armed with their canned question: “trick or treat?” Without fail, we respond with candy bars. Everyone smiles, most say, “Thank you,” and off they go into the night. That’s how it’s always gone . . . until last year, when we met an unusual trick-or-treater.

During our candy-distribution frenzy, we had a group arrive at our doorstep. They did their thing (“trick or treat?”) and we did ours (candy bars). As the group left, one young lady just stood there, staring at us. That stare and her costume (at least we think it was a costume) were super creepy.

Now, while we love Halloween, we’re not into horror. We’re more of a It’s the Great Pumpkin, Charlie Brown kind of Halloween family. So, this was getting really intense. We thought she was doing it for effect — which was working. We all stood there for a few minutes, simply staring at each other. I wanted to close the door, but that didn’t seem right (or smart). I was hoping for more trick-or-treaters to come by, so that they could break the spell. That didn’t happen either, and she just kept staring.

Then, she broke her silent stare and slowly raised her hand, holding out the candy bar we’d just given her. If a candy bar could kill, this was the time! She stretched out her arm, with the candybar held like a knife pointed at us, and noted, “I did not say, ‘Trick or treat?’ I said, ‘Quip or tweet.’”

“What?!,” I exclaimed. She then explained.

Apparently, she was taking a psychology course, and they were studying automaticity of action. As an experiment, she wanted to see how many people would simply respond with candy, no matter what she said. “If I give you back your candy bar,” she asked, “would you initial my paper, so I can show my professor verified data?” “If you tell me what you’ve learned so far,” I replied, “then I’ll sign.”

She told me that she felt it was important to understand how biases work, so that we can find ways to disrupt them. That way, progress could be made on new perspectives. She asked us to think about biases around gender types, sexual orientation, race, and class. She hypothesized that if we can understand how to disrupt the auto-responses that produce our unconscious biases, then that would be the first step in changing perspective.

Our encounter went from creepy to really interesting. In fact, it got me thinking about what happens to negotiators at the negotiating table — all those times we react inappropriately as a result of auto-responding to what somebody says. For instance, when someone says something as simple as “no.” What was your reaction? Did you assume you knew the reason behind the no, or did you ask questions to better understand it? Or that time someone said, “That won’t work for me.” Did you just start throwing money at the problem, or did you ask why that won’t work for them?

How we’ve been conditioned to respond to certain statements, questions, and answers can be the difference between a great deal and a mediocre deal. It can be the difference between making a relationship stronger or making it worse. Being in the moment can certainly help induce a more thoughtful and conscious response. Asking questions can help us to better understand the actual need and motivation behind it, instead of assuming that we know. Being creepy . . . is, well, just being creepy.

That was probably the best trick-or-treater I’ve ever had. I signed her paper and told her to keep the candy bar for changing my perspective — that was a great treat.

We Can Help You React Appropriately at the Negotiating Table.

It happens to negotiators all the time — reacting inappropriately at the negotiating table as a result of auto-responding to what somebody says. Let’s face it, how you’ve been conditioned to respond to certain statements, questions, and answers can be the difference between a great deal and a mediocre deal, between making a relationship stronger or making it worse. The question is, how do you disrupt the auto-responses that produce your unconscious biases? We can help! Drawing on 46 years of real-world negotiating experience, we’ll assist you with getting better deals, saving time, and creating value for all involved — not to mention preserving and even strengthening relationships. Let us partner you with one of our advisers, ensuring that you’ve got the broadest view of your deal.

Call one of our experts today:

Brian Buck
More by Brian Buck:
You're too expensive!
Walking Away
Back to Insights