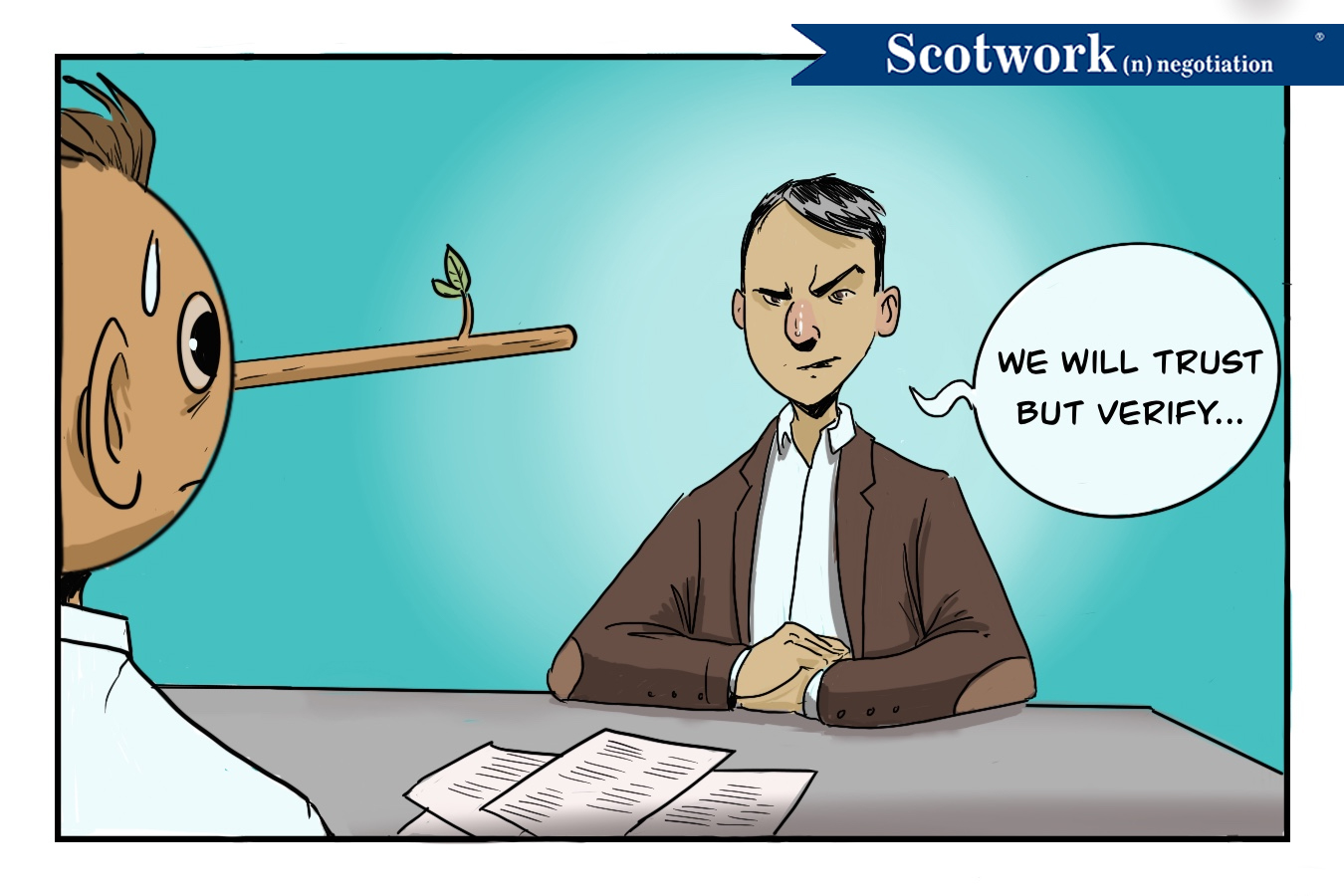 Our earlier blog post, You’ve Been Lied To, was one of our most popular this year. Which makes sense, since we all know that we’ve been lied to at some point during a negotiation. However, if you think you’re being lied to, the bigger question is, what do you do about it?

Dr. Timothy Levine, of the University of Alabama, conducted decades-long empirical research as he developed his Truth-Default Theory. This theory holds that most people generally believe as truth what they see, read, or hear. It’s what helps us to function socially, but it also makes us more vulnerable to deceit. In fact, Levine’s studies revealed that we can detect lies only about 54% of the time.

That does make it difficult for us negotiators. Which is why, in the last post, I suggested some signs that the other side might be lying to you at the negotiating table. Notice the word might. That means there’s a possibility that you’re not being lied to, and there might be different reasons why the other party is behaving in a seemingly deceptive manner.

One of our readers from last week chimed in, sharing their thoughts on what might be happening instead:

“The list of characteristics in the blog can be easily misinterpreted and misapplied if the presumption is that they indicate deception. They could very well be the result of poor narratives, poor planning, or unexpected and aggressive challenges by the ‘honest’ party.”

I think they’re right. There could be reasons why someone is being evasive or verbose that have nothing to do with deception. Besides poor planning or other challenges, their behavior might stem from nerves or other emotions that manifest themselves in actions appearing to indicate deception.

Another great point. It’s harmful to assume. The bigger problem I see is that while people default to trust (or truth), they rarely verify. So here are some things that you can do if you think you’re being lied to:

The data is clear: People are willing to lie to upset the balance of power. However, detecting those lies can be difficult. As the Truth-Default Theory suggests, most of us will default to trusting what the other side tells us. But that also means we need to be present and aware in order to distinguish between actual lies and mere miscommunications.

We Can Help You Distinguish Between Lies and Miscommunications at the Negotiating Table.

If you’ve spent time at the negotiating table, you know that people are willing to lie to upset the balance of power. The question is, can you tell the difference between an actual lie and a mere miscommunication? We can help! Drawing on 45 years of real-world negotiating experience, we’ll assist you with getting better deals, saving time, and creating value for all involved — not to mention preserving and even strengthening relationships. Let us partner you with one of our advisers, ensuring that you’ve got the broadest view of your deal.

Talk to one of our experts today:

Brian Buck
More by Brian Buck:
When a bad deal is good
Dealing with a bad deal
Back to Insights